Etobicoke is a borough of Toronto, Ontario and is bordered by the bustling cities of Toronto and Mississauga. The city rests along the shore of Lake Ontario, with the Humber River running on the east side of the city. Etobicoke has maintained its green space parks and waterfront parks even though the area is becoming increasingly urban. The city is home to over 360,000 people, all from different backgrounds. As a municipality of Toronto, Etobicoke has a culturally diverse population. Many households are composed of couples without children, and the largest population by age group is between the ages of 25 to 44 years old. In Etobicoke, many of the dwellings are high-rise condominiums, the second most common are single-family homes, and the third most common are mid-to low-rise condominiums. There is a wide range of new condo developments in Etobicoke as more and more people move into the city. By investing in Etobicoke real estate, you will also have easy access to major economic hubs, like Toronto and Mississauga, where there are many job opportunities within a 30-minute drive. Taking the 400-series highways, Gardiner Expressway, and the QEW provides easy access throughout the city and the Greater Toronto Area. Public transportation is also available through the Toronto Transit Commission (TTC) and GO Transit.

Why Buy New Condos in Etobicoke?

Etobicoke is an ideal place to invest in a new condo development due to its prime location. The area provides access to many opportunities for real estate investment, career development, and educational programs. The city has seen various developments ranging from detached houses to high-rise condos. Purchasing a new condo in Etobicoke will give residents access to a variety of work sectors and educational services. In Etobicoke, the top occupations are business and finance, management, trades and equipment operations, and education, law and government. The city also provides easy access to Toronto and Mississauga, where there are a variety of career opportunities. Students living in Etobicoke can also easily travel to various post-secondary educational institutions within the GTA. Lakeshore Campus of Humber College, University of Toronto – St. George Campus, and Ryerson University are all within less than an hour’s drive of Etobicoke. In Etobicoke, elementary and secondary education is offered by the Toronto District School Board and the Toronto Catholic District School Board. As part of the Greater Golden Horseshoe, Etobicoke is part of the Places to Grow Act. In all Greater Golden Horseshoe regions, the Growth Plan aims to help make life easier and more affordable for residents. The plan advances economic growth, expands housing supply, creates jobs, and strengthens communities. As a result, there are many opportunities to invest in new condos in Etobicoke.

The Etobicoke workforce is highly skilled, with 64% of the population having post-secondary education. The top five occupations in Etobicoke include sales and service, business and finance, management, education and law, and trades. Etobicoke’s key industries include scientific and technical services, retail trade, health care, finance and insurance, and educational services. Some of the top employers in Toronto include CIBC, Scotiabank, Magna International, Toronto District School Board, TTC, and TD Bank. As part of the City of Toronto, the location of Etobicoke allows easy access to a variety of career opportunities.

Average Prices of Condos in Etobicoke

According to TREB data, all types of properties in Etobicoke (Toronto West), including condos, sold for an average price of approximately $995,714 for the current year of 2021. Condos in Etobicoke are selling for an average of $653,752 in 2021, and listing days on the market are on average 13 days. In Etobicoke, the average price of a condo is lower than the average price throughout the city of Toronto and the GTA, which are $716,976 and $682,280, respectively. The average cost of renting a studio condo unit is $1,400. The average rental price for 1- and 2-bed units is $1,715 and $2,200, respectively. The benchmark condominium price in Toronto, which includes Etobicoke, is $660,400, which is a change of 4.69% from the previous year.

Buying a new condo in Etobicoke provides easy access to many options for transit services and to various highways. Transit services in the area are provided by the Toronto Transit Commission (TTC) and GO Transit. Residents can find GO Transit services at Long Branch GO, Kipling GO, Mimico, and Etobicoke North GO. All GO Transit lines in Etobicoke have a route to Downtown Toronto and are all one or two stops away from Union GO Station. Another option for Toronto-bound commuters is to use Line 2 of the TTC Subway, which has three stations in the Etobicoke region. Residents can use the TTC Subway from Kipling, Islington, or Royal York Station and arrive in Downtown Toronto in less than 30 minutes. There are also many bus lines and a few streetcar routes running in Etobicoke. For Etobicoke residents who need accessible transit options, the TTC offers Wheel-Trans Services and Community Buses. Wheel-Trans services are available 24 hours a day, seven days a week, and those using the service must schedule their trips online or by phone. TTC has implemented the technology on its vehicles to make travelling barrier-free. TTC streetcars and buses are equipped with ramps and kneeling features to allow those with mobility devices to enter the busses and streetcars with ease. All TTC vehicles also have Priority Seating, where seats and spaces are reserved for customers using wheelchairs, have disabilities, or the elderly or pregnant women. From Kipling Station, riders can take the 900 Airport Express bus route to travel to and from Kipling Station and Pearson International Airport in 10 minutes. Residents who drive can travel to other parts of the GTA via the QEW, Gardiner Expressway, and Highway, which connects to Highway 401. 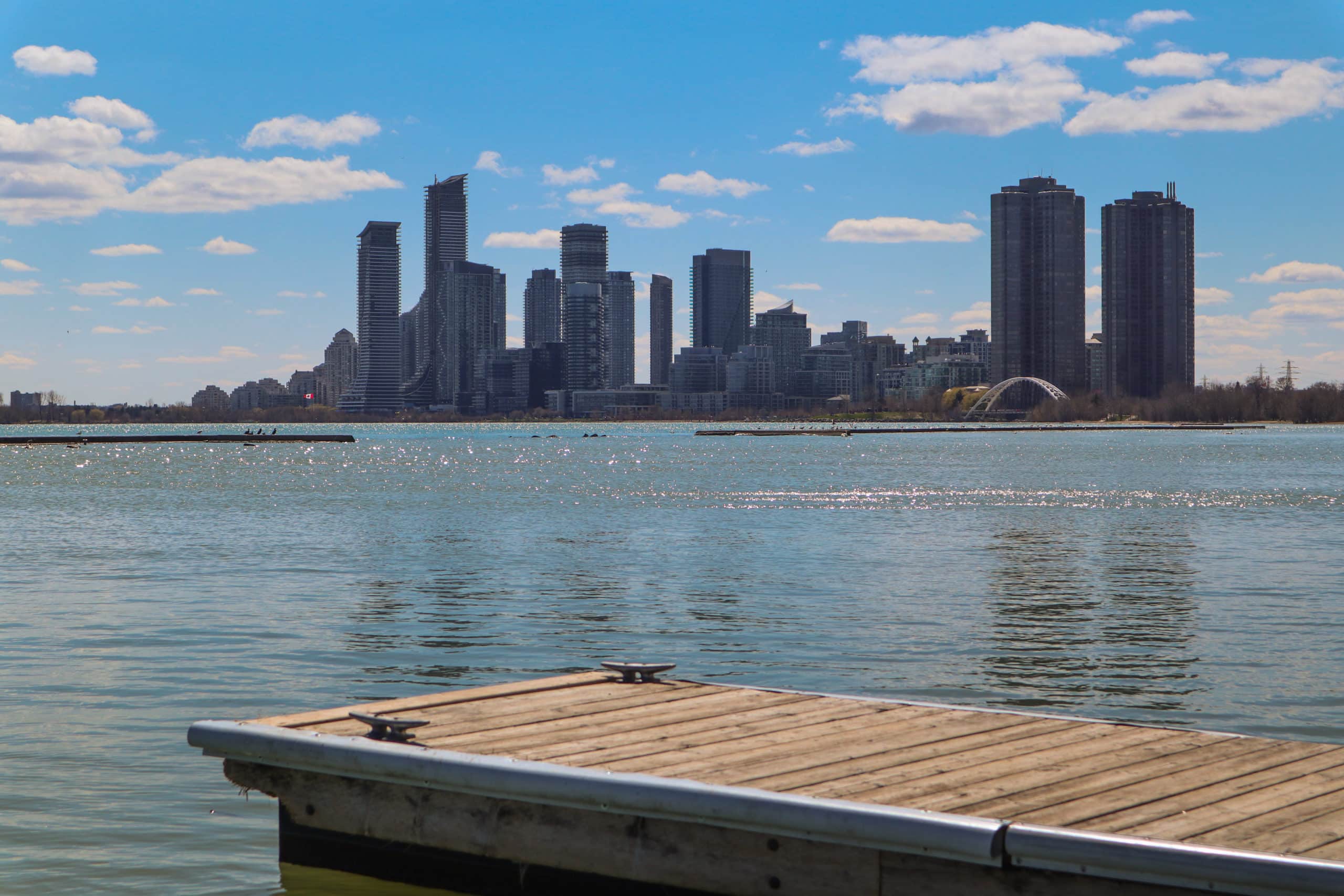 Etobicoke has over 20 diverse neighbourhoods, each with its unique charm. Consider the neighbourhoods of Mimico, Queensway, Islington City Centre, Eatonville, and Kingsway if you are looking for a new condo in Etobicoke. Mimico is a neighbourhood located in the south end of Etobicoke and located along Lake Ontario. There are many green spaces, waterfront parks, and trails in the Mimico neighbourhood. Residents who need to commute to Toronto travel via Mimico GO or the Gardiner Expressway, or Highway 427. Many of the homes in Mimico are newly developed detached homes and high-rise condos. Along the Mimico waterfront are local shops and eateries that residents can enjoy, as well as trails where locals can walk or cycle. Located north of Mimico, Queensway is a great neighbourhood with lots of new condo developments. Queensway has a convenient location, where residents can reach downtown Toronto in 20 minutes by using the Gardiner or via Line 2 (Bloor-Danforth) of the TTC. Residents of the Queensway neighbourhood can enjoy nature in nearby parks like South Humber Park or Jeff Healey Park. There are eight schools in the Queensway area, operated by the Toronto Catholic District School Board and the Toronto District School Board. Islington City Centre is a residential and commercial area and is a great place to search for a new condo in Etobicoke because of its easy access to shopping areas, public transit, highways, and green spaces. Islington City Centre has convenient access to Highway 427, the QEW, and the Gardiner Expressway. There are many shopping centres in the area including, CF Sherway Gardens, Smart Centres Etobicoke, and Kipling-Queensway Mall. The neighbourhood also has two TTC stations, Islington and Kipling, and one GO station, Kipling, which makes it easy to travel through Etobicoke and Toronto. North of Islington city Centre is the family-friendly neighbourhood of Eatonville. Most of the Eatonville residences are located near Highway 427, with most being older pre-existing homes, with the addition of newly developed homes. The nearest TTC station and GO station in Eatonville is Kipling and is 5 minutes away by car or public transit. The Kingsway neighbourhood is a great place to look for new condo developments in Etobicoke. Kingsway is located west of Humber River and between Dundas St West and Bloor St West. This neighbourhood is mainly a residential area with single-family homes, townhomes, and condominiums. Kingsway residents have many options for shopping and dining along Bloor St W. Residents can travel to and from Toronto using Line 2 of the TTC, from the Royal York station. A new condo in Etobicoke will allow you to take advantage of excellent transit, recreational facilities, schools, and career opportunities in Toronto and Mississauga.

Why Should You Purchase Pre-Construction Condos?

What is Interim Occupancy?

Is Etobicoke a Good Place to Invest?

It is a good idea to invest in pre construction condos in Etobicoke owing to its proximity to a number of colleges and universities including Lakeshore Campus of Humber College, University of Toronto St. George Campus and Ryerson University. There are thousands of students who look for accommodation close to their colleges, making Etobicoke a hotspot.